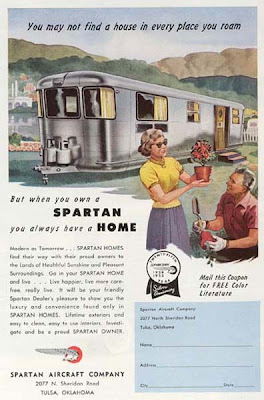 I have found one of these. It is a Spartan Imperial Mansion, made in the '50s by Spartan Aircraft Company. Spartans are similar to Airstreams, but the typical Spartan is larger and more deluxe than the typical Airstream. The one I found is 42' long, and I initially thought it was a house trailer instead of a travel trailer; but upon further research I found that it is indeed a travel trailer: 8 feet wide and 42 feet long, which falls within travel trailer size limitations in all the states I checked (generally 8.5' wide x 45' long, max.), and it uses standard truck tires rather than the 14.5" rim temporary tires that house trailers use.
This is a big selling point with me. Had it been a house trailer I would have still found it interesting, but unworkable; because my intention (if I buy it) is to work on it at home and then, when it's ready, tow it to Terlingua and set it up on my land there. No way am I paying the fees associated with towing a house trailer that far, even if the house trailer were free.
On the negative side, it is going to need some work, because most of the windows have been broken and, though the factory wall paneling is in pretty good condition, the floor is a little soft. So I will have to replace the broken glass and put new plywood on the floor. I will probably just paint the plywood and use rugs.
On the positive side, because it needs work, it won't bring the big bucks that nice ones bring. Also, it HAS to go; and I was told that the price will strongly reflect that fact.
Hopefully, I will have updates soon.
Posted by Tracy at 1:36 PM

Email ThisBlogThis!Share to TwitterShare to FacebookShare to Pinterest
Labels: mobile

You can find some good feedback on doing your renovation over at the VanDwellers group on Yahoo. there were recent blogs on insulation and flooring.

Thanks, Paul! I also found a dedicated Spartan group on Yahoo.

How nice to find your blog! I am a freelance writer and am planning a trip to Terlingua to look at land in just a few weeks. Our family plans to "homestead" as well. We all spent some time looking over your blog and were grateful for the information, such as the water availability, etc.

Hi, Sharon! I'm glad you found my blog. I think you will love Terlingua, as I do. If I can help in any way, don't hesitate to ask.
I spent some time looking at a couple of your blogs as well, and plan to link.