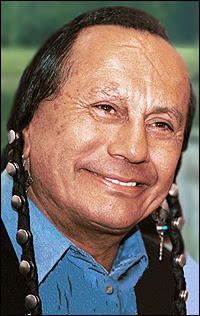 Russell Means is a world-renowned figure with achievements in many areas. He's an actor (Last of the Mohicans, Natural Born Killers, and Pocahontas), author (Where White Men Fear To Tread), political activist (founder of AIM, the American Indian Movement), candidate for Libertarian Party presidential nomination (1988), singer, entrepreneur, and much more.

In his widely-praised 1997 autobiography Where White Men Fear To Tread, Means tells the story of his political evolution, including his encounter with libertarian ideas and the Libertarian Party.

I do not know if I would say that Liberterians are completely marginalized and inefective. Any small group like them is going to have a hard time getting lots of stuff done.

I don't think most Libertarians want to get lots of 'stuff done'. Generally speaking they simply want the Government to leave them alone and let them live their life.