Thomas Woods on Nullification of Centralization

"And suddenly people are peering into the long neglected Thomas Jefferson toolkit. And they're looking for things that might work. Now some of these things, like nullification, I have to warn you, are not approved by the New York Times. And, in fact, what I tell you tonight does not fall inside that box that all good Americans are supposed to confine themselves to. We're supposed to be in that box. You all know it. It goes from Joe Biden to Mitt Romney. You're allowed to be somewhere in there. But, if you stray a little bit over here citizen, be careful, be careful - you're not respectable. Well my view is, is that it's our job as good and decent Americans to crush that box into the ground and then set it on fire."
Posted by Tracy at 1:23 PM No comments: Links to this post

An Alternative View On Ron Paul

Alternative, that is, to the mainstream media's version. I have tried to stay out of the election debate because you, the regular readers of this site, are intelligent folks who are quite capable of thinking for yourselves. It occurred to me however, that to see something perpetuated that is not true and fail to make any effort to provide an alternative view is irresponsible. Therefore, I provide this video for those who are interested. At the same time, I would like to address a couple of claims by Ron Paul's detractors.

First, the 9/11 thing. A lot of people are decrying Dr. Paul as a "crazy truther" for his assertion that the 9/11 terrorists attacked us because the US government sends troops to occupy Middle Eastern soil, rather than because they hate us for their perception of our way of life. I am by no means an expert on Middle Eastern politics, but my understanding is that the Muslim terrorists are not an organized army with centralized control. I am pretty sure that the typical terrorist makes his or her own decision as to degree of involvement in the conflict. What I am 100% sure of is that they are people, with the same basic motivations as the rest of us. Sure, when they hear about some of the things people do in the US, it probably does make a lot of them hate us. When we hear about slave labor being used in China, it makes most of us intensely dislike the Chinese slave masters. I'm sure some people actually hate them, based on what they hear. There are people in this country who literally hate those of us who hunt wild game. But how many of them would leave their family and fly to Africa, for example, and face certain death in an attempt to kill elephant hunters? There certainly are some who would, just as there are some Middle Eastern fanatics who welcome death for the glory of martyrdom. But the terrorists who come over here are not such complete morons, in my opinion. I base that on the fact that bringing down the World Trade Center was not the kind of thing a moron could pull off. Thus, while the terrorists who attacked us on our soil were undoubtedly full of hate for the US, it probably was not the blind hate of those who are incapable of reason.
Now, think about the very valid concerns about the UN that the average prepper holds. How many are willing to leave their home, never to return, and launch a suicide mission against the UN because of its desire to impose control over US citizens? There are a few within the US who would do so, but I daresay none of us would support them. If the UN were to land troops here to kick down the doors of suspected gun owners as some reports say is a possibility in the future, what then? Would you take up arms against them? Would you even be tempted to take the fight to their headquarters? Patriot fiction and online discussions that I have read indicates that at least some patriots would do so. I am not claiming (and do not believe) that the terrorists who brought their fight to us are morally equivalent, just that their mindset is similar. Again, there are certainly nutcases over there who would like to attack us here because of who we are, just as there are inner-city gangs who would take over entire suburban areas to rob, rape and pillage if they only had the wherewithal to do so. But they simply cannot pull it off. Not because there are cops patrolling their own neighborhoods, but because they would be cut off and rounded up like cattle before they got very far. I think what Ron Paul is saying is that those who do have that wherewithal would not undertake such an expensive, dead-end action if they didn't see US troops on their own soil. Why would someone do that otherwise, who is not a complete moron?

Another thing Ron Paul's detractors claim is that the polls that overwhelmingly support Dr. Paul are rigged; that he doesn't actually have that many supporters and that there are a relative handful of supporters who are computer geeks living in their mother's basements who spend their time smoking pot and hacking the polls in order to vote multiple times. My answer to that is simple: Ron Paul supporters raised over six million dollars in one day. That in itself indicates that he has widespread support.
Posted by Tracy at 2:00 PM No comments: Links to this post

I've mentioned Slab City here before. It is a former military base (and adjacent to a current military base) in the southern California desert, where an impromptu community of  RV tramps and off-grid types has sprung up. Life is hard at the Slabs, but the rent is free and no community development types come around to hassle you. For some people, the sense of freedom there is more important than the comforts of a modern home. They are enough of a minority to keep Slab City out of the mainstream press, most of the time. But there are exceptions to every rule, as this article on Time proves:

"The Last Free Place in America" lives up to its nickname. Want to hang out nude in thermal mud baths or skateboard stoned in the bowl of an Olympic-size pool? Go for it. In the mood to construct outlandish pieces of art with scrap metal, dig an SUV-size trench for no particular reason or play 18 holes of golf on a grassless course to the sound of bombs in the distance? This is the place. Yet despite the anything-goes reputation, those who stick around the Slabs long enough insist they are made to feel welcome, provided they have the right attitude. Free meals and entertainment are on offer, capped by Saturday-night concerts at the Range, a clapboard venue that showcases live acts of varying quality. This bohemian aspect was featured in the 2007 film Into the Wild, rare mainstream attention that drew a surge of newcomers to Slab City. 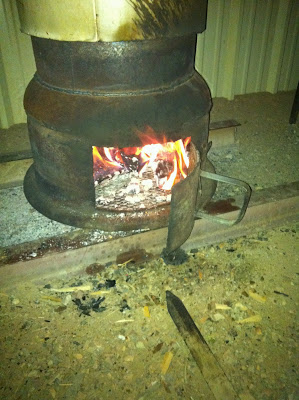 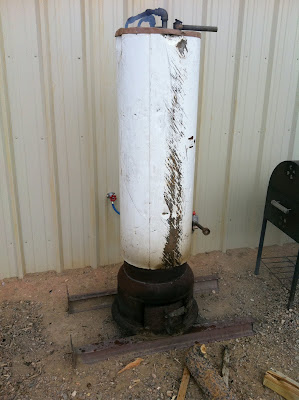 This is a cheap wood burning water heater; great for missionary work or a remote cabin, backwoods lodge or camp.


Here is what you will need to build your own wood-fired water heater:

Use a cutting torch or grinder to cut a side door into the rim. This is where you will feed wood into the heater. Weld the hinge to the section you cut out, and to the wheel. See the first picture.
Cut adapter plate out of 1/4-inch or 3/8-inch steel. The adapter plate will be basically a large washer, that will fit the bottom of gas water heater opening to the truck rim opening.
Weld the angle iron to the bottom, as in the second photo.
Leave the bottom open and set it on a brick base.
This heater will make more hot water than you can imagine. Once the water is hot and you have a good bed of coals in the base, you have enough hot water to take 6 long showers in a row and still scald a pig with whats left. Great camp site hot water, no propane to buy or run out.

If you get fire too hot, the water heater pop off valve will relieve the excess pressure and let cold water in. This set up is cheap to use.
Once the water is hot, it will stay hot for 24 to 36 hours depending on out side temperature. If you add insulation it will stay hot even longer. This idea even could be used as a  hot water boiler for heating the house in cold weather.
Warning: this water heater is for outside or out-building use only; it is not safe for use in a dwelling or any building attached to a dwelling.

Mark is the author of the Water Well Drilling Troubleshooting Guide

He may be reached at Drillcat.com or waterwelldrillingschool.com.
Posted by Tracy at 1:57 PM No comments: Links to this post