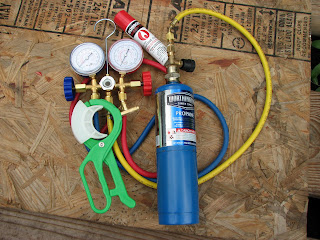 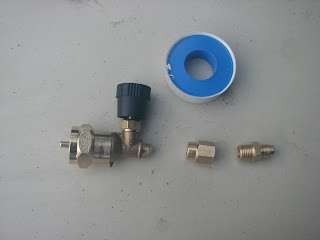 R12 Air Conditioner Repair
I have posted in the past (here and here) about automotive air conditioning. This post is not redundant, though. It is intended to be a more comprehensive description of how it is possible to resurrect a nonfunctional car air conditioner. Possible, but not necessarily legal. I know that the use of hydrocarbon refrigerants such as propane, isobutane and commercially available blends thereof is outlawed in some US states, and direct replacement of R12 with such refrigerants is illegal throughout the US. I also believe that mixing refrigerants directly in the AC system (as opposed to mixing in a separate container) is illegal in the US. If you are in Canada, you may be subject to much less-restrictive law. Either way, you are responsible for knowing what you can and cannot legally do. This information is therefore not a recommendation, but educational only.

Lots of us frugal types drive a vehicle old enough to have left the factory with an R12 based air conditioning system. As you may remember, sometime around 1994 the governments of the US and most other countries banned further production of R12 Freon refrigerant. R134 replaced R12 in new cars in the US and most of the world, and automotive repair shops did big business converting existing cars to R134a when they needed service. In fact, we owners of R12-based systems were told that R134a was the only way to go, other than paying increasingly high prices for dwindling R12 supplies. The big problem was that cheap R134a conversions often resulted in major air conditioning system failure in short order, necessitating a complete system rebuild. The only sure way to avoid this, we were (and still are) told, was to rebuild most of the system to begin with. This included replacement of all hoses with the new barrier hoses because R134a, with its much smaller molecule size as compared to R12, leaked out much faster than R12 did. Some people didn't convert, though. I was one of those. I and others like me heard the horror stories of failures and huge repair bills resulting from simple 134a conversions, and balked at paying a thousand bucks to do it "right." So we paid 900% more for R12 when we could afford it, not to mention paying shop labor charges because another new law required certification and licensing to even purchase R12. When that charge of R12 leaked out, if we didn't have $300 to have it recharged again we fell back on "4-60 air conditioning" (four windows down, 60 mph). A few people even drove their cars to Mexico whenever the AC quit working, to get a cheap R12 recharge where it was still unrestricted. About this time, I started hearing stories of some people simply recharging their AC with propane. At first glance it seemed like a really bad idea, and a lot of people get bent out of shape if anyone even alludes to it in their presence. Just do a search on some automotive forums and you will see what I mean. But in some countries such as Japan and Germany, hydrocarbon refrigerants have been and are used extensively with few to no problems. In fact, although I haven't verified it, I have heard references to BMW using HC refrigerants in some markets after the R12 ban. Straight propane works pretty well as a refrigerant, and being lighter than CFCs, it takes less than half (closer to a third) the amount by weight that the same system would use of R12 or 134. This helps a bit with the safety concerns when you consider that the typical car AC only needs one pound or less of propane for a complete charge.  The problem is that EPA expressly forbids the use of any unapproved refrigerant, including propane, as a direct replacement for R12. They do however have a list of refrigerants that are approved as a replacement for R12. Among these are Freeze-12, R406a, Free Zone, Ikon 12, SP34E, Autofrost, and a few others in addition to R134a. To the best of my understanding, once a former R12 system is converted to one of these approved refrigerants, later conversion to propane or other hydrocarbon refrigerant no longer constitutes a conversion from R12. Therein is the gray zone that allows the sale of prepackaged hydrocarbon refrigerants such as HC-12a: EPA doesn't specifically ban it (as of yet, as far as I have been able to ascertain); only its use to directly replace R12. The bottom line is that as far as I can tell, it is not necessary to go for a complete system rebuild (as with R134a) to convert from R12. Just do the far simpler and cheaper conversion to an approved refrigerant that is actually designed and approved to directly replace R12, such as the well known Freeze-12. Contrary to popular belief, it is not hydrocarbon-based. In fact, it is mostly R134a, but has some other stuff added to make it live with the mineral oil in R12 systems. The point is, it is cheaper than R12; and if it leaks out too quickly for your liking or you simply want to use something cheaper, you will no longer be replacing R12. You did that last time, when you switched to Freeze-12 (or R406a, or whatever).
By the way, a search of ebay will turn up sellers who list refrigerants that they claim are fully compatible drop-in replacements for R12, R134a, R22 and just about anything else, with no changes necessary. These products are propane/isobutane blends just like you can make at home. A couple of examples are Enviro-safe and Super Freeze. Both of these are marketed as direct replacements for R12. If you go to the manufacturer's website you might find a cryptic reference to "first generation" and "second generation" R12 replacements. That is just their way of referencing the EPA law without coming right out and telling you that using their product as a direct replacement for R12 is illegal. I personally have no problem with either those manufacturers and sellers, or DIYers who do convert directly to non-approved refrigerants. More power to them if they get away with it. In my opinion, that is one of many stupid laws anyway, that unnecessarily hinder individuals and small businesses in order to profit the government and the big corporations that are in bed with the government. But I do believe in covering my own assets, and helping others do the same. Therefore, convert to an approved replacement before you even seriously consider using an unapproved refrigerant.

Now, more about those HC refrigerants. As mentioned, some people did and do use straight propane. There are a couple of things to consider about using propane. First, it is best to steer clear of the bulk tanks, like the 20-pounder that powers your grill or the appliances in your RV. That stuff just has too much moisture in it. A better plan is to use the disposable bottles like you buy for torches, lanterns and camp stoves. At 14.1 to 16 ounces, they are also just about the right size for a full fill. Second, be aware that propane will run at higher pressure (on the high side) than R12, although lower than R134a. That is ok and lots of folks accept that, but the prepackaged HC refrigerants like HC12a, Duracool 12a, OZ 12, etcetera add isobutane to the mix. The isobutane lowers the head pressure to the same as R12, and the resultant mix is actually more efficient (cools better and with less horsepower input) than R12, and substantially more than R134a. The ideal mixture is 79% propane and 21% isobutane. This is the mix that the above-mentioned HC refrigerants all use, and is what the EPA calls "Hydrocarbon Blend B." The thing is, you can buy it for about $10 per can and use an R134a charge hose, but you will have to buy it online and pay shipping. But what some other people do, and what I am about to describe here, is mix it at home. Before I go on, just let me say that this mix is fully compatible with R12 and R134a, so if there is any residual refrigerant of either type in your system, it won't wreck your system. In fact, some people have illegally topped off existing systems with propane, with no ill effects noted. But don't do that. You are supposed to evacuate and capture the existing charge of whatever might be in there before recharging with anything. It also makes the measurements easier, although those measurements are in no way critical. Here is what you need, should you be planning to try this:
Here is how I made my propane tank adapter: Harbor Freight sells a propane torch kit that has a hose between the actual torch and the tank attachment point. It is perfect because it the valve, which attaches directly to a standard disposable propane tank, is threaded to accept the hose. It was not dirt cheap, but when you are not using it for air conditioner service you can still use it as a torch. I just unscrewed the valve, took it to my local home-improvement store and bought the fitting I needed to adapt it to the one-quarter inch flare fitting that is on the fill hose of my gauge set .

Now, what I did after having the remaining Freeze-12 evacuated from my system by a friend who has a license, was to simply refill with propane. Straight propane does run higher head pressures than the refrigerant that the system was designed for, but according the information I found there is no problem as long as you monitor the low-side pressure as you fill the system, and do not allow it to exceed 60 psi when the compressor is running. Here is how I did it:
If I decide I want to have even more efficient air conditioning and lower head pressures, the propane/isobutane mixture works better. Since it is illegal to mix the two components directly in the system, I have to do it into a separate container. An empty 16-ounce propane tank works well for this. This requires a second propane valve. The procedure is as follows:
If you decide (on your own responsibility by the way; not mine) to make your own mixture, make absolutely sure that your can of lighter fuel specifies "Isobutane, CAS # 75-28-5" as the ingredient. Regular butane will not work, and might destroy your air conditioning compressor. This is because regular butane is still a liquid at the pressures found in an air conditioning system.
Posted by Tracy at 12:49 PM 21 comments:

This is my Bluebird TC2000 bus conversion RV, popularly known by those who camp in them as a "Skoolie." It has a Cummins 6BT diesel engine and an Allison MT543 automatic transmission. A Skoolie is a good choice for a large RV because it has the frame and running gear of a logging truck and the body is designed to stand up to a rollover. This makes it a safer and more robust vehicle than the typical Class A RV. I also like the fact that I can put my motorcycle right in the back of it; no trailer required. I no longer have the slide-in camper. It had to go to make room for this skoolie.
Posted by Tracy at 2:57 PM 3 comments: Links to this post