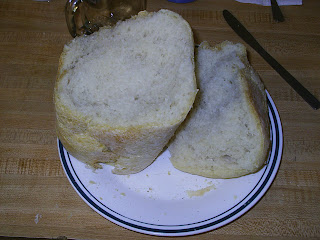 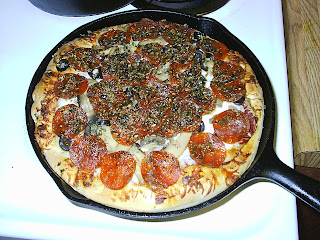 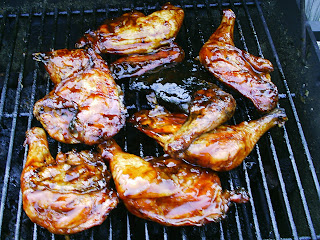 I don't know how I ever got along without a bread machine. I just figured, bread is pretty cheap, and making bread really just sounds like an awful lot of work. I can still buy grains, and if I ever go through a(nother) time of extreme low-budgetness to the point that I can't afford to go to the store more than once a month, and only buy staples even then, I can just make porridge and/or sprout the grains. Of course, I have been making cornbread for decades; I guess I could have also added some other grains to the cornbread to further enrich it.
Well, I can still do those things, but now I can make bread, too! I just found a perfectly good bread machine, complete with owner's manual, for the princely sum of 2 bucks at my favorite thrift store. This allows me to make my own bread, without the necessity of spreading out a large area I don't have in my kitchen, beating, rolling and pounding on dough for hours, getting flour all over everything, scientifically regulating the temperature and humidity, and keeping all sorts of special ingredients that deteriorate at roughly the same speed as a loaf of bread.
That's not how it really is, of course, but it's how it seemed to me. I had actually thought about buying a used bread machine before, but the ones I saw at the thrift didn't come with a manual and besides, I kinda expected those machines needed even more specialized ingredients that would cost more than just buying bread, while turning out something barely edible. It was pretty much a case of, it was worth $2 just for the experience.

Boy, was I surprised! What I found out is that you can just throw in a handful of ground grain, some lukewarm water and a teaspoon of plain old yeast that any grocery store carries, and you will get bread. Probably heavy, dry, bland-tasting bread, but quite edible. I actually tried this, after my first loaf. For the first loaf I looked in the manual at the recipe for "basic bread" which called for water, instant milk powder, 3/4 teaspoon of salt, a couple teaspoons of sugar, butter, flour, and yeast. The recipe said to measure carefully and follow instructions exactly for best results. So I started with about a cup of whole milk, poured a small mound of salt in my cupped palm, about twice that of sugar,a splash of canola oil, a couple good handsful of flour, and a little mound of yeast. Pressed two buttons, and went off and did something else for about 3 1/2 hours. When I returned, I had a loaf of the best bread I have ever tasted!
Man, that was easy! Thus bolstered, I studied a little further and conducted an experiment. While boning up on this stuff I read that milk (powdered or otherwise) only enriches the bread with some extra vitamins without really adding much taste, oil or butter makes it moister but the taste is subtle, thus butter doesn't significantly improve the taste compared to plain veg oil (you can also use bacon fat or whatever), salt enhances the flavor slightly but primarily regulates the yeast action, and sugar, honey, molasses or whatever also doesn't really sweeten the bread. I mean, you can add enough to sweeten it but generally you only add a little, as a snack for the yeast. The yeast can get everything it needs from the grain, but it is just generally happier if you give it a little dessert. And happy yeast makes a better-tasting product.

OK, the bottom line of all that is that, as noted before, you really only have to have three ingredients to make edible bread. So I sallied forth to make the absolute poorest bread I could muster. This is a survival exercise, now. You're boondocking in Mexico, have been for 2 1/2 months, and you're down to a few pounds each of wheat, dried beans and rice, plus a yeast culture you keep in a little flour, and perhaps a handful of jerky from a rabbit you caught in a trap a few days ago. You have two weeks yet before your dividend check is due to arrive at your P.O. box just across the border, so ya just gotta subsist on this meager fare until then.
OK: humble bread. First I went to my favorite feedstore, and got a 50 lb sack of wheat. Grain prices are 'way up this year, and it cost me $13.50 so that makes a 1 lb loaf of bread 27 cents if I'm growing my own yeast; about double that otherwise. I ground a pound of this wheat in my cast iron hand-cranked mill, running it through twice which took less than 5 minutes, then dumped it into the bread machine along with a cup of water and a little yeast, and 3.5 hours later I had a loaf of heavy, dark, bland bread. Not bad, just not tasty. It was much better with some butter smeared on, and it was fine for eating with soup, which is what I did with most of it. It would do wonders for a meal of bean-and-rabbit soup.
My next loaf of bread consisted of 1/2 lb of this same hand-ground whole wheat flour, 1/2 lb store bought cheap white flour, some bacon grease, water, a spoonful of honey, salt, and yeast. I also threw in a few spices, including crushed cayenne chile. Now THAT was some good bread!
Then I tried the dough cycle, wherein the machine makes the dough which you take out and do your thing with it. This is good for making biscuits, pretzels, etc. I used it to make pizza crust, the end result of which you can see in the picture.
Oh, the BBQ chicken pic? I just threw that in to prove that I do eat other stuff besides peasant food.
Here's a link to a grain mill like mine, if you want one:

Email ThisBlogThis!Share to TwitterShare to FacebookShare to Pinterest
Labels: homestead

Discussing and shooting a few break-barrel shotguns. Further research on the Topper M48 indicates that they were made from 1943-1957; this one appears to have been made in 1953. Here is the collector's reference of H&R firearms: https://amzn.to/2GbVyYY
Posted by Tracy at 7:50 PM No comments:

The Sound Of Freedom!

No bumpfire stocks on this firing line! Footage from the firing line at the Knob Creek machine gun shoot. This shoot is coming up in just a couple of weeks. I had planned to go and get some new footage this year, but unfortunately I just can't afford the trip.
Posted by Tracy at 3:58 PM No comments:

Some of you have seen this video before. This post is primarily a test for embedding from DTube. Looks like it's gonna work!
Posted by Tracy at 11:29 AM No comments:

Email ThisBlogThis!Share to TwitterShare to FacebookShare to Pinterest
Labels: guns

In my reloading shop I have several powder measures, but all or most of them require some setup before I can begin reloading. That's why I also have some of these powder dippers from Lee. They are graduated in cubic centimeters from 0.3cc to 4.3cc, and come with a slide rule to convert to grains of various powders. This allows me to just grab the dipper corresponding to my desired charge, and begin reloading. Works great, especially if I am just loading a few rounds.

Email ThisBlogThis!Share to TwitterShare to FacebookShare to Pinterest
Labels: reloading

This is one of my videos that Youtube had a problem with. The slam fire is just about the simplest firearm possible, and this one is safe because it uses a real .357 Magnum rifle barrel and a breech bolt that is strong enough to contain the pressures. There is a bit of black iron pipe and a cast iron fitting, but those are only support pieces and are not subjected to firing pressures.


For more info on improvised guns, check out these books by Ragnar Benson.
Posted by Tracy at 9:49 AM No comments: