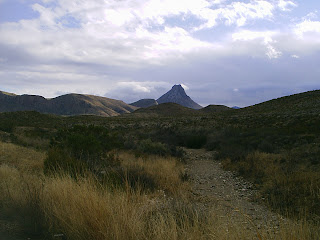 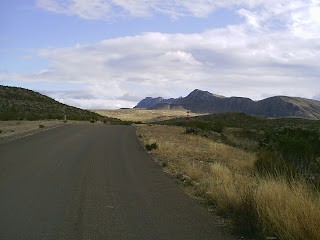 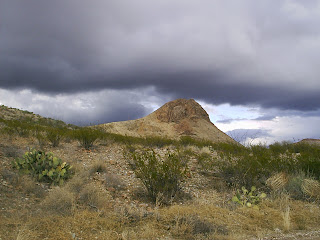 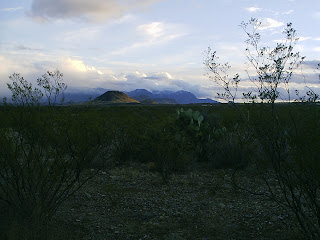 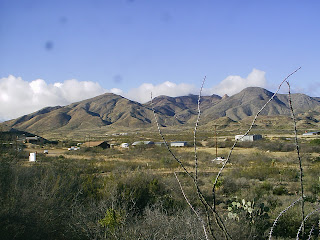 Go to Part I

When I saw Santiago Peak (the 5th photo in Part II), off in the distance to my
left, I knew I was getting close. I was driving south from Alpine on 118, and I
was watching for this 6500' peak as a landmark, because I knew from the
topo maps that it could be seen from my tract on the northern border
of the ranch. It looked just as awesome as I expected, too; with a low
cloud shrouding its summit.

About 25 miles farther, I reached the first paved road I had seen

(other than the one I was on), intersecting from the left, along with

a sign displaying the Bad Rabbit brand and the words, "Terlingua

Ranch". I had arrived! I turned in, noting the ranch store on the

corner with water tanks for sale outside, and drove slowly so as not

to miss any of the impressive scenery.

The terrain is fairly flat desert interspersed with numerous hills and

a few larger mountains. Small dirt roads, some well-graded, others

faint two-tracks, intersect the main ranch road. You can see an

trailers are common, too. The pavement ends after about 13 miles, and

Headquarters is a cluster of buildings surrounded by small mountains.

the desert. One of the roads winds around the base of the nearest

mountain, and has pullouts for RV camping. There are a few duplexes

which comprise the motel, and there is a restaurant, swimming pool,

a rifle range and separate pistol range, a chapel, etc. In the center

is the ranch office, and most of the other buildings are within

walking distance. Two water wells are located behind the office.

Let me digress here for a minute, to discuss the water situation at

the ranch. Most people who live here fulltime have a large storage

tank and a roofed area that is usually larger than the dwelling, to

rainwater collection area. The area receives, on average, 9 inches of

rain per year. I won't go into a detailed discussion of the math, but

1 cubic foot of water is approximately 7.5 gallons; that is how much

water 12 square feet of roof area will gather, per inch of rain.

Working from that, assuming a large enough tank, and that the tank is

should gather a conservative minimum of 1 gallon per day, averaged

over the year. That means 1000 square feet, which is by most people's

standards a small house, will gather an average of at least 10 gallons

per day. Build a small house with large overhangs, a covered patio and

you've got 20 gallons per day, fulltime. A couple or small family who

can't make it on that, has no business living in the desert.

Wells are not out of the question, either. I've been told that water

is about 300 feet down in most areas of the ranch. That's not bad. I

don't know how much a drilling company charges in the area, but I

think $10 per foot is an average rate in most areas. That would make

that you could probably sell for $20,000 just because it has a good

well. The downside is if the driller doesn't find water, you still

have to pay him.

But what if you just bought 5 acres to camp on, don't intend to live

there, and it's gonna be awhile, if ever, before you you can even

think seriously about buying a big water tank or anything else

permanent? Do you have to haul 50 gallons from home for a camping

trip? No. You're not gonna have to travel with 500 lbs of water

sloshing in the back of your vehicle, like I did. The two wells I

mentioned earlier behind the ranch office are for landowners to

purchase water. One of the wells is certified potable, the other is

not. They are right next to each other. The certified water is, I

think, 15 cents per gallon; and last I checked the uncertified water

not bad at all. Heck, you could even live that way indefinitely,

solution. One thing, though. The water you purchase from the ranch is

slightly sulphurous, so it doesn't taste very good. You can get used

to it, and I hear it's actually good for you, but I still think I

would use a charcoal filter for my drinking water.

OK, back to the ranch office. The ladies who work there are beginning

to wonder if we're ever gonna come in. Inside, there is a counter

where you can get the help and/or answers you need. There are also

seats, to take a load off, and magazines to read and buy. The front

room to your left is a store for all kinds of souvenirs, and behind

that is another room with maps of the ranch all around the walls, more

maps in a rack for sale, a computer, a coffeemaker (always full), and

a central table surrounded by chairs. This room always has at least a

coffee, perusing maps, and carrying on several conversations at once.

We'll be revisiting this room later.

I met the ranch manager, whom I had been warned was an ogre; but I

found her to be a very gracious, friendly, and helpful hostess. In

fact, everyone there welcomes landowners like family, and they go out of

their way to accommodate you. Of course they are welcoming to

non-landowners too; but if you own land they know they'll be seeing

After the long trip, I was too tired to set up camp right away, so I

got one of the rooms for the first night.

Thanks for you report on the Ranch. I look forward to reading more. Interesting place to say the least.

Thanks! I'll be posting more soon.