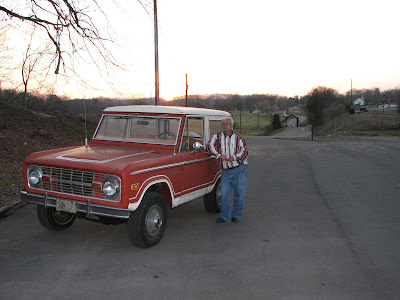 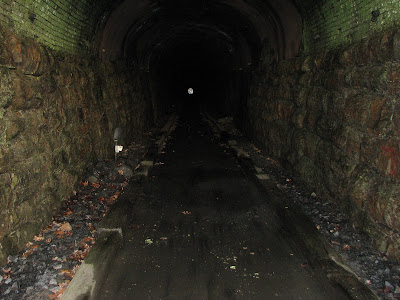 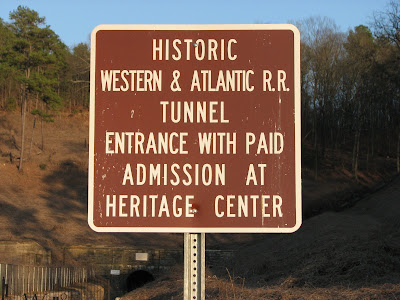 There are lots of accessible, yet kinda' off the beaten path, places to go in the States. I've been to a lot of them, too. Some are great places to stop; others, well, you would do better to just keep on truckin'. Anyone who has spent much time on the road knows the value of inside info from one who has been to whatever town you are looking at, just as the sun is setting...

So let's say you left Florida yesterday (makes sense, 'cause it's just starting to get hot there) and you are heading north across Georgia. You made it through Atlanta earlier today, sticking to I75 to hasten your departure from that hellhole; and now you are ready to slow down the pace, get your bearings, camp a couple days before perhaps heading farther east for some prospecting action. Where to stop?

I recommend Tunnel Hill. It is just far enough from both Atlanta and Chattanooga to escape the urbanization, yet close to any services you may need. It is off the Interstate, a few miles north of Dalton. If you take the northernmost Dalton exit and go north on US 41/76, you will arrive in Tunnel Hill in just a few minutes. A few miles further north, the highway you are on rejoins I75 at Sugartown, and there is a truck stop there with the cheapest gas and diesel fuel you are likely to find anywhere.

Here is what Wikipedia has to say about Tunnel Hill:

Tunnel Hill is a city in Whitfield County, Georgia, United States. It is part of the Dalton, Georgia Metropolitan Statistical Area. The population was 1,209 at the 2000 census.

Tunnel Hill was incorporated on March 4, 1848 as Tunnelsville, and changed its name in 1856. Both names refer to a nearby 1,447 feet long railroad tunnel through Chetoogeta Mountain, officially dedicated on October 31, 1849 by Etowah steel-maker Mark A. Cooper on behalf of the state-owned Western & Atlantic Railroad.

The tunnel was the first completed south of the Mason-Dixon Line. The rail line was operating during the late 1840s with passengers and freight being portaged over the mountain while the tunnel was constructed. Another tunnel next to it, completed in 1928, is still used by its eventual successor CSX Transportation. The original Chetoogeta Mountain Tunnel is now paved for tourists to walk through, and has even more historic value as the Great Locomotive Chase passed through it in 1862. Throughout the American Civil War, the area homes around Tunnel Hill were used as part of a major hospital system. Wounded Confederate Gen. John Bell Hood was brought to the Clisby Austin House after the Battle of Chickamauga. His leg was buried in a family cemetery near the house. The Clisby Austin House also acted as the Headquarters of Union Gen. William T. Sherman while he made his plans for his famous Atlanta Campaign. The general area of Tunnel Hill hosted many engagements and camps throughout the course of the war. All that is remembered today through an annual Battle Reenactment that is held in September each year.[3][4][5][6]

Tunnel Hill is located at

According to the United States Census Bureau, the city has a total area of 1.5 square miles (3.9 km²), all of it land.

There were 451 households out of which 35.0% had children under the age of 18 living with them, 63.0% were married couples living together, 12.9% had a female householder with no husband present, and 20.2% were non-families. 18.0% of all households were made up of individuals and 8.4% had someone living alone who was 65 years of age or older. The average household size was 2.68 and the average family size was 3.00.

When you visit there, you will almost certainly meet Mr. Bradley Putnam. Bradley is the man pictured above standing next to his early Ford Bronco, and he is the town's historian. He enjoys greeting visitors and telling them anything they wish to know about the town. Bradley has also come to know quite a bit about the subjects of geocacheing and treasure hunting, and can entertain you for hours, if you are interested in those subjects (as I am).

Two great Georgia state parks are nearby, when it comes time to set up camp for the night. To the east is Cloudland Canyon. I have camped there several times, and it is one of my favorite parks to camp in. Here is more info:

Cloudland Canyon State Park is a 3,485 acre (14.10 km²) Georgia state park located near Trenton and Cooper Heights on the western edge of Lookout Mountain. The park, one of the largest and most scenic in Georgia,[1] offers rugged geology and beautiful vistas to visitors, as it straddles a deep gorge cut into the mountain by Sitton Gulch Creek, where the elevation differs from 1,980 to 800 feet (604 to 244 m). Several spectacular views are found in the picnic area parking lot, though several additional views are located along the rim trail. Located at the bottom of the gorge are two waterfalls cascading overs layers of sandstone and shale into small pools below.

The park, previously known as Sitton Gulch, was purchased by the state of Georgia in sections, beginning in 1938. A project of Civilian Conservation Corps built the first facilities and signs in the park, which opened the following year.

Cloudland Canyon as viewed from the top of the gorge

Cloudland Canyon was designated a state park in 1938 when the state began acquiring land from private owners. Two of these were the Mathews and McCaig families who still live in the area today. Land acquisitions continue sporadically as new property becomes available. The park, which was originally 1,924 acres (7.8 km2), has grown to its present size of 3,485 acres (14.10 km²).[2]

Until 1939 the only access to the area was through Tennessee or Alabama. That year Georgia began work on Highway 136 to connect U.S. 41 to the recently purchased park. The Civilian Conservation Corps did much of the early work to construct the state park and access roads.

The park is located on the Cumberland Plateau, atop Lookout Mountain. At the top of Lookout Mountain the waters of Daniel Creek and Bear Creek cut gorges before converging to form Sitton Gulch Creek.[3] The flat-topped mountains of the Cumberland Plateau are significantly different from the narrow Armuchee ridges beyond nearby Chicamauga Valley to the east. From a geological standpoint Lookout Mountain is transitional between the flat-lying sedimentary beds of central Tennessee and the ridges and valley lying to the east, which display more intensive folding and faulting.[4] Most of the canyon's rock formations consist of sandstone; shale layers below the sandstone are marked by pine trees.

Over 200 million years ago a great ocean covered the modern day park. Lookout Mountain was created through seismic activity. When it was first formed the entire mountain was still underwater, but slowly the water subsided, until the rim of the canyon was a beach on this ocean.[5] As the great ocean dried the creek took over and continued eroding the rock. The sandstone has a tendency to fracture into squarish blocks, creating unusual boulder formations.[6] The concave shape of the top of Lookout Mountain drains rainwater through fissures into the underlying limestone. This action formed miles of caves in the area.

The bottom of Cloudland canyon contains a slope of rock tallus, which are sandstone and shale fragments. The valley floor is also rich in fossil-bearing limestone.[7] A paved, wheelchair-accessible trail 1/4 mile in length goes along the rim overlooking the canyon.[8] The park also features three more extensive hiking trails, including one backpacking trail. These trails are generally moderate in difficulty.

The Waterfalls Trail begins on a paved section, at the main overlook, and progresses into the canyon on a 40-degree slope. Most of the trail consists of gravel and stair-steps, numbering over 400. Both waterfalls cascade off of sheer faces at 60 and 90 feet (27 m), and are among the most beautiful in the state. The trail is a strenuous hike which may take 90 minutes.[9] The first waterfall is at 0.3 miles (0.48 km); the second waterfall, at the bottom of the canyon, appears at 0.5 miles (0.80 km). The creek flow feeding the waterfalls varies considerably according to the season.

In contrast, the 4.8-mile (7.7 km) long West Rim Loop Trail is rated moderate, although it contains a few short, steep rocky portions.[10] It is a scenic hike which offers panoramic views of the canyon. Beginning at the Daniels Creek Bridge, and climbing out of the canyon onto the plateau, the trail provides magnificent views of Trenton, Georgia, neighboring Sand Mountain, and of Cloudland Canyon itself. Cottages, West Rim, and Walk-In Camping areas are accessible via the West Rim Loop. Passing over varied terrain, most of the hike is moderately difficult, becoming strenuous on several short sections.

The 2.0-mile (3.2 km) Backcountry Loop Trail provides access to the park's eleven secluded primitive hike-in camping sites.[11] The trail, which begins at the parking area for group camping, passes through hemlock groves, progressing down a moderate grade into a hollow, filled with spring and summer flowers. On the far end of the loop hikers emerge from the hemlocks groves, back to level trail among oaks and hickories, and eventually return to the parking area.

Cloudland Canyon State park features a variety of camping and lodging options. There are 16 rental cottages as well as a group lodge. The park also offers 73 tent, trailer and RV sites, 30 walk-in campsites, and 11 backcountry campsites for backpackers. There are also four pioneer sites for groups of tent campers. Some of the tent/trailer/RV sites offer hookups and feature nearby washrooms.

Also in the park are picnicking areas including a group pavilion, tennis courts, a children’s playground and a disc golf course. The park has an interpretive center near the main parking lot and adjacent to the canyon.

Annual events hosted in the park include a Wildflower Program in April; Adventure Weekend, also in April; and a Kids' Catfish Rodeo in May.[12]

To the east of town is Fort Mountain State Park, which I have visited but never camped at. Fort Mountain would be the best choice for those who are planning to head east into the prospecting areas. More info:

Fort Mountain State Park is a 3,712 acre (15.02 km²) Georgia state park located between Chatsworth and Ellijay on Fort Mountain. The mountain is named for an ancient 885 foot (269.48 m) long rock wall located on the peak. The wall is thought to have been built by area Native Americans either for defense or for ancient ceremonies. The informational plaques located around the park also suggest the possibility that the rock wall was constructed by the legendary Welsh explorer, Prince Madoc sometime after his alleged arrival in North America in 1170. Situated in the Chattahoochee National Forest, the park offers many outdoor activities, such as hiking, mountain biking, and horseback riding. The park is also known for its unique scenery, a mixture of both hardwood and pine forests and several blueberry thickets. In addition, the park contains a 17 acre (0.07 km²) mountain lake.

The summit of a different mountain in the south-southwest part of the park contains a radio tower for Georgia Public Broadcasting, transmitting TV station WCLP-TV (now WNGH-TV) since 1967, and radio station WNGH-FM since about May 2008.

The park is accessible via Woody Glenn Highway (Georgia 2 and Georgia 52).

Email ThisBlogThis!Share to TwitterShare to FacebookShare to Pinterest
Labels: travel