Why I Carry A Gun: Pirates! 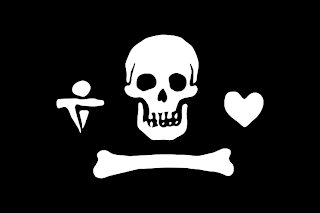 I wrote recently [here] about a Jeeping incident that illustrates one reason why I carry a gun. This was just one of quite a few adventures I have had where I was glad I had a gun handy. Here is another one that happened well over twenty years ago, where I survived an attempted robbery by pirates. This incident is somewhat similar to the Jeep story, but it happened on the water and is also quite different in how it went down.

It was a Fourth of July sometime during the 1980s. I had spent the weekend camping and waterskiing with two other guys of my acquantance, then on the afternoon of the Fourth we traveled up the coast via boat to the vacation home of another acquantance, where a party was going on. Near dusk the entire party piled into multiple boats and went to a bay where a large fireworks display was to take place. There were lots of other boats and even one small ship in the bay, floating at anchor and waiting for the fireworks. We all had a great time watching the fireworks, then went back to the house for more socializing. Now it was about midnight, and my two compatriots and I were cruising back to our campsite when we came upon a boat floating in the channel with the lights on but no engine power. The inhabitants of the boat hailed us and asked for a tow to the nearest public dock, saying that their engine quit and would not restart.
I had a bad feeling about the whole situation. I'm not sure what it was, but something didn't feel right. The owner of the boat had no such reservations, and headed for the supposedly disabled boat with no hesitation. When I asked him to hold back a bit, he was less than cordial about my lack of trust for my fellow man. At this point I opened my daypack and retrieved my .357 Magnum revolver. I sat out of sight of the people in the disabled boat, holding my revolver so that it was safe but ready for action should it become necessary. The owner of the boat was extremely displeased with my actions, but I sat quietly and ignored his insults. He had asked me while at the party why I never left my pack out of reach, and I informed him about the gun at that time. He had stopped just short of kicking me off his boat, and I had made up my mind that as soon as I made it back to my vehicle I would head for home and shun any further contact with the guy. Although I had known him for a couple of years, I never had any clue that he was so vehemently anti-gun.
So here we are approaching a disabled boat while I sat holding my revolver out of sight and hoping my gut feeling was wrong, when another boat came racing toward us with spotlight glaring, hailing us with a loudspeaker. Suddenly the engine of the "disabled" boat roared to life, and the boat took off at maximum speed. The other boat pulled alongside us, and turned out to be the marine police. They asked questions about the boat that had just left in a hurry, and informed us that several people had been robbed by pirates claiming that their boat was disabled and requesting a tow. Then the police took off after the pirates, but I don't think they caught them.
My former friend the boat owner didn't say another word to me, nor I to him. As soon as we got back to camp I loaded my gear and left, vowing silently to never again hang out with anyone who didn't support my right to carry a gun for my own protection.
While it is true that the gun didn't save me from the pirates in this instance, it was very comforting to have, regardless of what my anti-gun friend thought of it. The cops happened to show up in the nick of time, but in no way can you count on that to happen.

whenever my State Representitive's office people ask what legislation I'd like to see, I tell them I want "Vermont carry". (I'm not holding my breath) actually what I'd really like is for people in Vermont and Alaska to be asking their representatives for "Pennsylvania carry". probably will never happen. it would be difficult to improve on Vermont.

I had to let my permit lapse, because the Sherif's department wants me to name two references. when I first got my permit, I only used references which I knew that also had carry permits. do they want two new names to put in the database? I don't know that many people. (and I don't know anyone I'd want added to the confiscation database)

I don't know why they would want two more references. Maybe they have increased the requirement to four refs? I'm pretty sure they just want character references though, and it has nothing to do with whether the references also CCW.
I agree with you on Vermont Carry. I think Wyoming and Utah have joined the list of Right To Carry states, too. I was in Utah and Arizona recently and let me tell you, I was surprised at how good it felt to not have to worry about whether my weapon was concealed or not, whether the state even honors my license, etc.
This brings up a question I have for those who use supreme court justices and the Heller and McDonald rulings to justify their support of a presidential candidate who neither supports RKBA nor individual rights in any form: If Heller affirms that the 2A is an individual right and McDonald affirms that state and local governments are likewise bound by it, why do I still have to beg (and pay) for a permission slip from the government, then do Internet searches of each state before I enter it, to ensure that I don't end up in jail or even prison just for exercising my right?

Anyone could already tell that I'm a "character"...