Book Review: Farmer in the Sky by Robert A. Heinlein 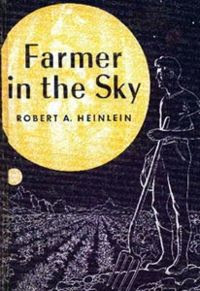 Most current scifi is garbage. The "science" displays a complete lack of knowledge of how things actually work, and emphasis is on social relationships and politics. Mankind's past is generally disparaged, and everything is now generally better, from a left-wing perspective. Most if not all humans are now enlightened and live in a Utopian society, free from conflict with any other living creature. Food is either conjured out of thin air by some machine that runs on the unlimited free energy of the universe, or is a synthesized vegetable product produced (also using free energy, of course) in a "green" manufacturing facility operated by the same benevolent, authoritarian government that oversees and attends to all needs of all living creatures. If the story in question is in book form, it is usually full of poor grammar and punctuation, and misspelled and improperly used words.
Enough of that. My point in the preceding is to illustrate an author whose work is not like that; the late Robert Anton Heinlein. I won't go into a lot of details about his life, except to say that Mr. Heinlein was a libertarian (small "l", philosophical libertarian as opposed to large "L", Party Libertarian) who was a firm believer in individuality, personal liberty and self-sufficiency. Furthermore, he was a highly educated man with a keen interest and understanding of hard science, from the study of planetology to the seemingly mundane study of agriculture. Moreover, he studied sociology, psychology and physiology in terms of how people really are, not how some wish people were.
On to the book itself. "Farmer in the Sky" is a story about a young man who is coming of age and is emigrating with his father and his father's new family (his mother having died some time before) to Ganymede, one of the moons of Jupiter, on which man has settled and begun the process of building a pioneer farming planet to relieve overcrowding on Earth.
In the story, potential emigrants are screened with an eye to choosing those most likely to be healthy, self-sufficient and able to adapt to the hard work and isolation of homesteading. The land is doled out in the manner of the old Homestead Act in the US, where the homestead must be "proved up" within a certain number of years by building a dwelling and making the land productive.
The surface of Ganymede is mostly rock (the water ice having been melted by the process of creating something similar to our ozone layer for a greenhouse effect), and making the land productive involves grinding the rock into sand and rock dust, then mixing in compost and a small amount of "pay dirt", soil imported from Earth which has the harmful organisms removed while preserving the beneficial organisms. These organisms feed on the compost and multiply, and later earthworms are bought from the cooperative to assist the process.
The cooperative loans out a machine for grinding the rock, and people from the community pitch in to help. Each homestead produces enough fertile ground to grow its own food, plus enough extra produce for trading purposes, as well as producing a few acres of fertile ground to give back to the co-op as payment for the land. Credit is extended to the homesteaders for purchasing building supplies, earthworms, and other needed equipment and supplies; this credit eventually being repaid in the form of produce or more converted acreage.
Wikipedia's article about Ganymede says that Ganymede contains water ice and liquid water (in addition to silicate rock, salt, iron, sulphur etc.) and an atmosphere of oxygen produced, along with hydrogen, by the action of radiation on water. Most of the hydrogen escapes into space, due to its low atomic weight. Heinlein discusses this in the book, as well as describing the view of the sky from Ganymede, its orbit including the fact that one side always faces Jupiter as our moon does Earth, and many other aspects which are backed up by hard science. The man knew what he was talking about.
I enjoyed this book very much, and heartily recommend it.
Farmer in the Sky was published in 1950.

Email ThisBlogThis!Share to TwitterShare to FacebookShare to Pinterest
Labels: books