The 6 Cutest Animals That Can Still Destroy You 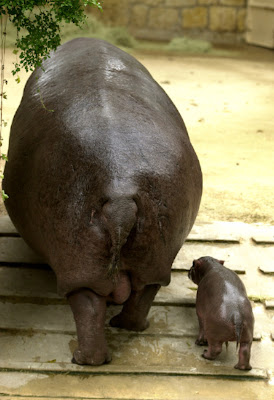 ...The next time you settle in for a game of Hungry Hungry Hippos, take a moment to to reflect on the small fact that hippopotamuses kill more humans per year than any other animal in the entire continent of Africa. Only elephants are consistently larger than hippos, and only the Warner Brothers' Tasmanian Devil is more consistently aggressive.

...The late Steve Irwin, a man who used to tackle 12-foot crocodiles for fun and wave angry snakes filled with kill-you-before-your-next-heartbeat poison at a camera, considered a five-minute sequence where his camera team had to cross a river filled with hippos to be the single most dangerous moment ever filmed on his show...

OK, some of this is probably exaggerated, but the stuff about hippos is true. The late Peter Hathaway Capstick, an authority on deadly African animals, has written quite a bit about how dangerous hippos are.

This guy kills me, the way he writes.
Posted by Tracy at 9:00 PM