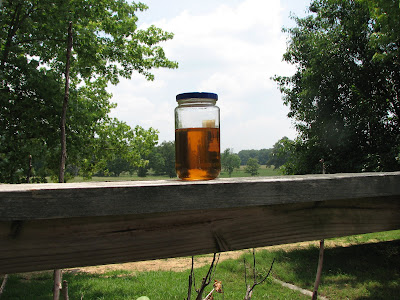 OK, this is part 3 of my video series on producing biodiesel at home. The photo is a sample of the finished, but unfiltered and unwashed, product of the batch shown in the video. It could be filtered and used as-is, and lots of home biodiesel producers do just that. It still contains a small amount of methanol, which isn't gonna hurt anything, and traces of soaps (transesterification and saponification are the same process), which probably won't either. However, I prefer to wash it.
This is my third batch, ever. I started with a small, one liter test batch, then made a 10 liter batch for simplicity of measurement(because 10 liters requires exactly 2 liters of methanol), and finally made this 3 gallon batch for filming purposes and because I needed some fuel! I have enough oil to make more, but I only had enough methanol left of the 1 gallon I initially bought, to make 3 gallons. So it's time to buy more methanol.
I need to build a larger and more permanent setup now, too. The aluminum stock pot I used is less than desirable, for a couple of reasons. First, it doesn't hold enough. It is time to start producing at least 20 gallon batches, and to do that I will need a much larger pot. Second, in the video, see that methoxide running down the side of the pot as I pour it into the oil? Know what that does? Well, the methoxide is a strong base, so it cleans the aluminum. Extremely well. So well in fact that it erodes the aluminum, producing hydrogen gas in the process. Not exactly a good thing.
So I'm thinking of using a 55 gallon drum with the bottom cut out, turned upside down so I can thread a pipe nipple into a bung hole, and a ball valve into that.
The next challenge will then be to develop a good, safe way to mix the methoxide. A glass container is best. I've seen some people using plastic, but I think the methoxide attacks the plastic after awhile. You've seen the setup I'm using for small batches, and it's sub-marginal. Will steel work? I'll have to research that. I'm pretty sure galvanized steel wouldn't, because the methoxide would attack the zinc plating. But bare steel, maybe. That would be good, because 5 gallon steel cans are common and cheap. Otherwise, multiple 1 gallon glass jugs will have to be used. I know 6.5 gallon glass carboys can be had, but they are expensive and in demand, plus it would be a really bad thing to break one of those, full of methoxide! Either way, I think I am going to try to build a shaker table to mix it, so I can just turn it on and let it do its thing, while I do mine. Or, I could use a pump like the commercial rigs do. Perhaps that is the way to go.
The last thing I need to address is the washing process. It's pretty tedious to do without losing some of the product to soap production, which happens if you try to do it too fast. I don't think that part will be a problem, though. I will probably just build a permanent structure out of wood 2x4s on top of the 55 gallon drum, and use that to support both the mixer and a water misting head for washing.
Of course, whatever I do will be reported right here. You can make sure you don't miss it by signing up for the Biofuels update list. Just enter your email address here:
Posted by Tracy at 12:07 PM

Email ThisBlogThis!Share to TwitterShare to FacebookShare to Pinterest
Labels: alt.fuel