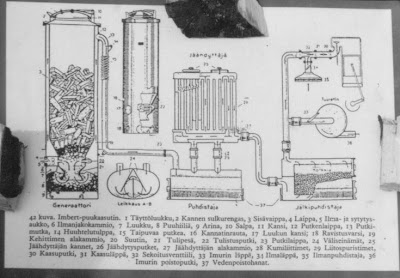 A wood gas generator is a wood-fueled gasification reactor mounted on an internal combustion engine, to provide a wood gas, a form of syngas. These devices are also known as gas producers.

Shortages of petroleum-based fuels during World War II resulted in very large numbers of such generators, often improvised. Commercial generators were in production before and after the war, for use in special circumstances or in distressed economies. Production skyrocketed during the war.

Gasification was an important and familiar 19th century technology, and its potential and practical applicability to internal combustion engines were well-understood from the earliest days of their development. Town gas was produced as a local business, and experience in the trade was very widespread; most practicing technical people would know a good deal about it. When stationary internal combustion engines became available, they were commonly fueled by town gas during the early 20th century.

By the time World War II arrived, town gas production had been displaced by petroleum gas, but older people remembered both town gas and gas-fueled engines, and wood gas generators were in active production.

The disadvantages of wood gas generators are: large size, slow to start (build a fire), and the batch-burn operation (of some designs). When not carefully designed and used, deaths have occurred because wood gas contains a large percentage of deadly carbon monoxide (CO) gas.

With rising oil prices, wood gas generators are coming back. The US Federal Emergency Management Administration published a book, "Construction of a Simplified Wood Gas Generator for Fueling Internal Combustion Engines in a Petroleum Emergency", in March 1989, describing a different design called the "stratified downdraft gasifier". It solves several drawbacks of earlier types, and should be used to guide contemporary projects instead of the earlier designs.

A project about the energy future of Europe was begun in 2005 in Güssing, Austria with contribution of European Union research furtherance. The project consisted of a power plant with a wood gas generator and a gas engine to convert the wood gas into 2 MW electric power and 4.5 MW heat. At the wood gas power plant are also two containers for experiments with wood gas. In one container is an experiment to convert wood gas, using the Fischer-Tropsch process, to a diesel fuel-like liquid. By October 2005, it was possible to convert 5 kg wood into 1 litre fuel.
From Wikipedia
Posted by Tracy at 10:17 AM