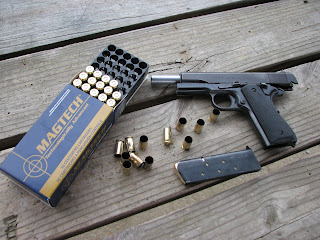 A few days ago I received an offer of a box of .45 ACP ammunition in exchange for a review of the supplier, AmmoForSale.com. After due diligence to ensure that the offer was from a legitimate company, I agreed. Three business days later the Brown Truck of Happiness dropped off a 50-round box of Magtech 230 grain hardball ammo. I grabbed my trusty Norinco 1911A1 and hied forth to the range to do some shooting.
I have bought Magtech ammo before. Unlike the cheap Russian steel-cased ammo, Magtech ammunition uses reloadable, boxer-primed brass cases. This is important to me because I reload my own ammo, and I don't like to spend money on ammo I can't reload. Magtech is a reloading-friendly ammo maker, and they also sell reloading components. In fact, I have bought and used their jacketed hollowpoint component bullets in the past.
So how did the ammo work? Just fine, thank you. This pistol is completely unmodified. If you know me very well, you know that is quite unusual; but I am trying to fully break-in this Chinese pistol before I modify it. I have less than 10,000 rounds through it, so I don't consider it well-broken-in yet. That doesn't mean I have had problems with it; I haven't. But this review is about the ammo and its supplier, not the gun.
The ammo shot very well, with zero malfunctions. It was accurate and shot to point of aim at 50 yards from my Norinco. The velocity of this 230 grain FMJ ammo is listed on the back of the box as 780 fps. I ran seven rounds across the screens of my 15 year old Chrony F1 chronograph and got an average of 810 fps, so it actually does a bit better than its paper specs indicate. Either way, it is within the correct velocity range for military .45 hardball.
I recommend that you check out AmmoForSale.com; they have very reasonable prices for the most popular types of pistol, rifle and shotgun ammo and loading components.
Posted by Tracy at 8:51 PM

Email ThisBlogThis!Share to TwitterShare to FacebookShare to Pinterest
Labels: guns

I love my Norinco 1911 also, the only thing I've done to it was replace the cheesy plastic grips with Pachmayrs - they rock! :^)