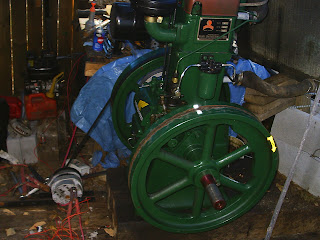 I posted this on the Vandwellers Yahoo Group [Link], in response to a poster who wondered about the feasibility of running a window-unit air conditioner in his RV while driving; powered by a battery bank, inverter, and the heavy-duty alternator on his engine. Another poster opined that inverters are too inefficient for that use, and I disagreed, saying this:

"I have a couple of comments based upon my experience living offgrid, fulltime, on an eclectic and ever-changing, designed by myself, system.
First, inverters: I have several cheaper ones for portable use etc. plus a GOOD one, the old style Trace 2500 watt modified sine wave unit. I have never seen a need for a true sine wave inverter. I have been using my Trace for years with zero problems, powered up continuously. It starts and runs air conditioners better than public power, because of better regulation. This is not theory, it is my personal experience.
Modern inverters really do achieve 90% efficiency, over their entire range. A good one will specify efficiency for all loads, and will guarantee those specs.
Where you WILL have efficiency problems, however, is in the alternator. Automotive alternators are less than 50% efficient; usually much less. Also, their output drops substantially after just a few minutes. I tried running just a 5000 btu air conditioner on my battery bank and Trace (already proven efficient over a couple of years' use) inverter, charging with a CS144, 140 amp Delco alternator powered by my 6 hp Lister-pattern diesel engine. After just a few minutes runtime, the system was operating at a deficit. The regulator in an automotive alternator just isn't designed for a steady, large load; and it can't keep up.
With the same setup, I put a 1500 watt load (measured with a Fluke meter and current probe) directly on the alternator, for the few minutes it would supply it. This was enough to cause my engine to load down and produce black smoke. At 746 watts per horsepower, the engine produces just under 4500 watts. By comparison, my 7.5 kw generator head can supply 3600 watts from the same engine, using the same serpentine drive belt. This serves to illustrate just how inefficient an automotive alternator is.
In closing, I agree with the previous suggestion of using a mounted RV generator for your power needs, in addition to an inverter for when you are not running the genny. "
There are actually more inefficiencies in such a system than just the alternator itself, but there was no point in getting any more in-depth, because of the constraints of the forum.
Posted by Tracy at 9:13 PM