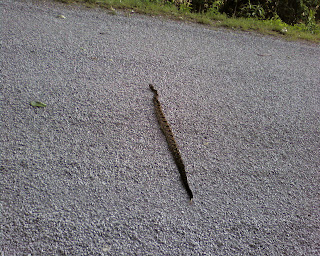 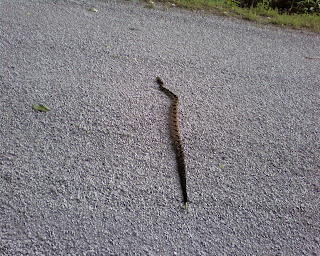 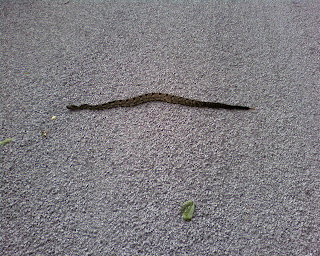 This is an average sized, adult timber rattler; about 4 feet long. Around here, when it's this dry, they come down off the mountains in droves, looking for water. I don't bother them, unless they are near the house; although I did promise a friend I would kill any I found in his cattle pasture. Apparently they bite cattle in the face or neck, causing them to die of swelling-induced asphyxiation. This friend passed away last winter, but his son still maintains cattle on the place, so I will still honor my promise if I ever run across a rattlesnake in the pasture.
When I do kill them, I eat them and preserve the skins. I've heard all the stuff about boiling them until the "snake oil" comes out so it won't be bitter or even make you sick, etc. It's all a myth. There is no "snake oil", and it doesn't have to be boiled. You can skin and gut it (although it will fight you every inch of the way; better cut off the head so you don't get bitten by a dead snake!), then cut it into chunks and grill or fry it. Tastes good; even better than alligator tail because there's no fishy taste. Good with hot sauce or barbeque sauce.
I let this one go on its way peacefully, same as I do most of them. They're generally docile as long as you don't push them. They're also beautiful snakes. I wish I'd had a better camera along; I took these pics with my camera phone.
Posted by Tracy at 8:59 PM