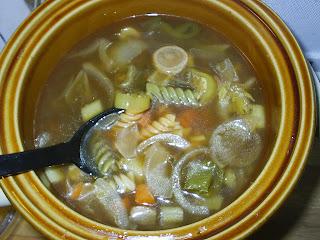 I know, it's not really soup season; but last weekend I had barbecued chicken, and rather than throw out the bones and other stuff that didn't get eaten, I made soup stock out of it. Then, today I was taking it out of the fridge and packaging it to go in the deep freeze, and I started noticing all the formerly fresh garden produce I had lying around. One thing lead to another, and I was in one of my "peasant food" moods, and throwing all kinds of stuff in the crockpot. I probably have less than fifty cents in the whole pot. The only storebought thing in it, besides spices, is a double handful of rotini. Recipe? We don' need no steenkin' recipe!
I just finished a bowl a few minutes ago; I'll probably save out a couple more bowls and freeze the rest.
Posted by Tracy at 8:53 PM

Email ThisBlogThis!Share to TwitterShare to FacebookShare to Pinterest
Labels: homestead