The Meteor that Hit Peru 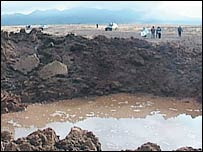 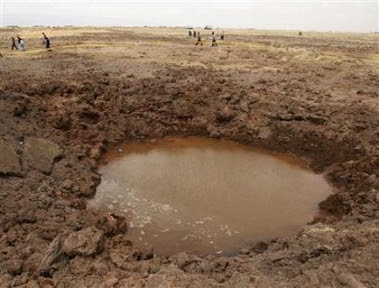 When I heard this story on the radio news last week, I forcibly ejected my drink from my nasal passages. Well, not really, but that would likely have been the case had I been drinking anything at the time. I mean, it had such a quality of surrealism about it; not so much like a real radio news report, more like a radio news report in a Superman comic. In fact, as soon as I got to a computer, I immediately emailed the story to a friend who is heavily into comic books like that. Still haven't heard back from him either; perhaps he is in a cave somewhere waiting to see if the world is gonna end.
Apparently some other people found it strange, too. In fact, there was even a story that someone had retrieved the meteor and sold it on Ebay. Here are some excepts from that story: "The buyer has agreed to go down to Peru to pick up the meteorite locally. He will have the meteorite cut into pieces and sent back aboard an old DC-3 aircraft that has been refitted with two 747 jet engines.

The meteorite was scrubbed and the smelly organic matter that covered it was removed. The organic matter originated in outer space. Tests conducted on the organic matter have revealed that the source of the smelly goo was a large intergalactic squid which came from the constellation Hydra."
Come on! Now somebody's pulling my leg. You can't put a 747 engine on a DC-3, that would be like putting a 426 Hemi in a VW Bug!
Now, a week after the fact, I'm still seeing news stories about the meteor, focusing on the fact that "experts" are pooh-poohing the whole thing and saying nothing fell from space. Of the reports from locals who reported seeing a bright meteor, they say that what the locals actually saw was a "fireball". So I looked up "fireball" on Wikipedia and its definition was "a bright meteor".
These "experts" go on to say that the crater is no crater at all, but rather a preexisting lake, from whence noxious fumes are emanating. Yeah, right. I buy that. These locals (who are referred to as locals because they happen to live locally to the crater) have been living there all their lives, never suspecting the existence of this nearby lake until, after seeing a fireball in the sky and hearing a large explosion, they just happen to stumble upon it.
Know what I think it was? I think it was a weather balloon.

P.S. If somebody will pick up the travel expenses, I volunteer to go to Peru and get to the bottom of the matter, and report my findings here.
Posted by Tracy at 2:00 PM

Haha, that's a great story! Surely you're not serious about going there to check out that big hole yourself? What if it's radioactive, or...you know, if u catch something from the remnants of that 'squid' from outer space? :-)

I'm probably safe. I doubt anyone's gonna take me up on it and pay my travel expenses. But if they did, just think of the stories I could write about it! ...if I survived, that is.