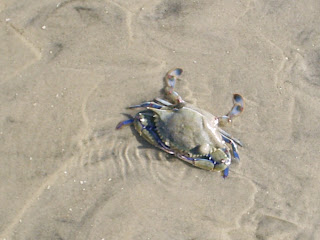 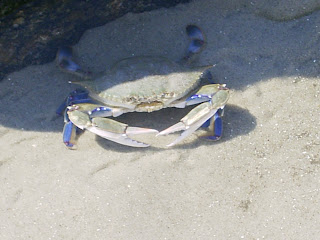 It's blue crab season! Blue crabs are found along the Atlantic and Gulf coasts in the US, and summer is the time to catch them. My preferred crabbing areas are the more secluded spots on the Atlantic coast in the Carolinas and Georgia. You can find them in calm bays and inlets, the soundside of islands, rocky shorelines, and under piers. They are easy to catch, too. The easiest way is to use a crab trap, but if you don't have one and are trying this for the first time to see if you like it, you can just tie your bait (chicken skin, necks etc. works well) on the end of a string, and let it sit on the bottom. When you feel a crab pulling on the line, give it a few seconds to become engrossed with its meal, then slowly raise it to the surface. As it approaches the surface, be ready with a net because it will probably let go when it sees you!
A throw net is another way to catch them, and I believe that is a common method used in Louisiana. You tie the bait to the net in several spots, lay it out on the bottom, and draw in the net after about 15-20 minutes; hopefully complete with crabs and perhaps a few other edibles as well.
Cooking the crabs is simple. You just boil a large pot of salted water, throw in the crabs, and boil them for about 10 minutes. That works, I've done it that way and they come out fine, but I prefer to do it Louisiana style: First, throw a few onions, new potatoes, ears of corn and whatever else you feel like into the water. Also spices like cayenne, black pepper, garlic, bay leaf etc. or you can take the easy way out and use Zatarain's:
When using loose spices, I add them a little at a time, pretty much continuously. If you add all the spices while the veggies are boiling, the veggies could absorb most of it, leaving little for the crabs. I throw the veggies in first, starting with the spuds, and let them boil about 10 minutes before putting in the crabs. You can probably start taking the corn out before you put in the crabs. After the crabs cook for about 10 minutes, dump the whole works out onto a newspaper-covered picnic table or the like, and dig in! If you like beer, make sure you've got plenty of that ready. Oh, and invite plenty of friends for the whole shindig.
Posted by Tracy at 11:45 PM

Well i just got to your blog and going thru some of your writings.
Wow that is a big crab. Why do they call it Blue crab, is the crab actually blue?

Look at its legs; they are bright blue. That is where the name comes from. It also indicates that it is a mature male; females have red claw tips.