Doomed Chernobyl reactor to be buried in giant steel coffin 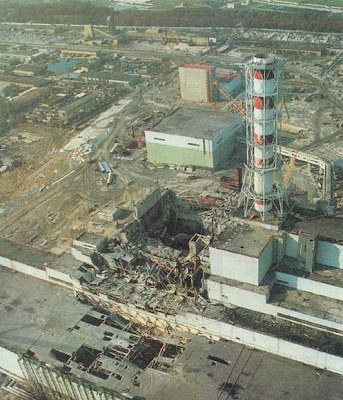 KIEV, Ukraine - Twenty-two years after the Chernobyl nuclear disaster, work is under way on a colossal new shelter to cover the ruins and deadly radioactive contents of the exploded Soviet-era power plant.
For years, the original iron and concrete shelter that was hastily constructed over the reactor has been leaking radiation, cracking and threatening to collapse. The new one, an arch of steel, would be big enough to contain the Statue of Liberty.

Interesting article. They could have left out the part about what Greenpeace had to say about it, however; or at least prefaced that part with a descriptor such as: "Greenpeace, a terrorist organization that would like you to believe they are scientists..."

If you want to read more about Chernobyl, this is by far the best and most informative thing I have ever seen on the subject.
Posted by Tracy at 4:09 PM