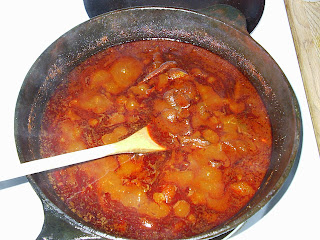 This morning I was reading about the annual Chili Cook-off in Terlingua, and thinking about maybe attending this year. I plan to go there sometime this fall, and that would be as good a time as any. Except for the crowds that is, but that would only last a couple of days.
So anyway, reading about the Cook-off lead me into reading the inevitable discussions about what does and doesn't constitute "real" chili. Now, the very name tells us what it is: "chili con carne" means "chili (peppers) with beef". That not only describes the primary ingredients, but also conveys that it should be hot; otherwise it would be called "carne con chili". It is generally conceded that the beef can be replaced with venison if that's what you have. Beyond that, it degenerates into a brawl between the various camps over whether or not it should have beans, tomatoes, flour, pork instead of beef, the addition of rattlesnake meat, etc. Then there are those who make "mild" chili, "vegetarian" chili. C'mon! If you want to call it "chili con frijoles" or more likely "frijoles con chili", fine but it's NOT chili con carne!
OK, now I've stepped in it; so I might as well tell you what my views are on the subject. First, as noted above, it's GOTTA be hot and it's GOTTA have beef or venison as a primary ingredient. Rattlesnake meat is optional as an addition to, not substitution for, the primary meat. Otherwise it would be "chili con crótalo". Beans? Let me break here to talk a little about what is, to me, more important than the exact ingredients. What are the surroundings? If you are at home in the city, whipping up a gourmet dish for the family, feel free to make chicken chili, vegetarian chili etc. and cook it in an aluminum pot, crockpot or whatever. Also, call it whatever you like; it's your dish. To me, the word "chili" conjures up a crusty old desert rat, sitting in front of his hogan (which may or may not have started as a cheap, run-down travel trailer), cooking himself some grub for the next few days in a cast-iron pot on his fire. He has some chiles that he either grew himself, watering the plant with catchment water, or bought at a roadside market somewhere. Some beef he bought also at a market, or venison he killed in a nearby canyon. Will he have beans? Of course! Beans are a staple for the old codger; he buys them by the 50 lb sack! So I guess beans or no beans in his chili depends on how much meat he has and how far he needs to stretch the chili. If he has plenty of meat (killed a deer in the canyon), he's gonna want to eat as much of it as he can and jerk the rest; so he probably won't add beans. If he doesn't have much meat, just a pound or so of beef, he will probably stretch it with some beans. If he has some fresh or dried tomatoes, he will probably throw some in for variety. And if he kills a rattlesnake that wandered into camp, there's a good chance he'll roast it over the fire and cut it into chunks to add to the chili, because he's too frugal to waste good meat.
So there you have it, my idea of REAL chili!
BTW, all this talk of chili whetted my appetite, so I made some for lunch, as you see in the picture above. I used venison from the freezer, fresh jalapeños and tomatoes from the garden, garlic, sage, oregano, onion, and no beans (this time).
Posted by Tracy at 11:27 AM

Thanks! It was good.