Now, THIS is an interesting development! 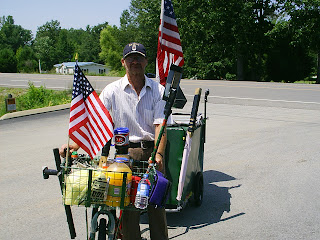 A few weeks ago, I posted this story [Link] about a bicycle vagabond I saw on the highway. This morning, I received this comment (edited for typos; original post left unchanged):
Anonymous said...

Sorry to report that you were snookered. I am a Park Ranger in Indiana, and on 8-6-07 this Michael Prophet was found camped in a county park. After hearing much the same story you report, I moved him to an actual campsite where he would be safe and where showers, etc. were available; and made plans to provide breakfast. All that was pending the outcome of a routine background check to see if he was who and what he said he was.

Turned out he did not spend 27 years in the AF, but did spend some hard time in prison in two states; including a long term stay in CA for a murder. He also had four outstanding warrants for theft charges. A search of his gear found drug paraphernalia, pornography and weapons.

He is now in jail waiting transfer on the warrants.

I found your site during my research on his story. Please be more careful when you meet strangers. You may be lucky to have not been harmed.

The kneejerk reaction to this is; "Gee, I'm lucky this horrible criminal didn't attack me! We're all so lucky to have so many heroic authority figures around to protect us from people like this!"
Sorry. I don't see it that way. I have nothing against the ranger who posted this comment; I'm sure he is doing his job to the best of his judgment. I also don't doubt that he is who he says he is; the timing is correct. However, the way it apparently happened leaves a bad taste in my mouth.
First, let me say that this "Michael Prophet" is obviously no angel. I didn't think so at the time that I met him; there were just too many inconsistencies in his story. However, rather than think of him as a serial murderer by whom I was lucky not to have been robbed and murdered, let's look at the facts as presented and consider what could be the reality.
1. He did hard time in California for murder. OK. Definitely a bad thing, but probably not 1st degree murder; otherwise he would still be in prison. So what was it? Vehicular homicide? Or was he, perhaps, passed out on heroin in the back seat of a "friend's" car when that "friend" murdered somebody in a drug deal? That would not be a good thing, but not Charles Manson either.
2. Prison time in another state. Nothing about murder this time. Drug charges? Burglary, to support a drug habit (the ranger did say drug paraphernalia was found in his possessions)? Again, not a shining example of humanity, but he apparently did his time.
3. Theft warrants. Well, he wasn't packing a car in that cart. Nor a big-screen TV. What did he allegedly steal (warrants don't equal convictions)? Food, perhaps?
Look, this guy probably needs to be in jail, but there's no way we can know for sure from the information given. If he has prior felony counts, it is a certainty that he would not have been released after 30 days had he been actually caught and arrested for anything, no matter how minor.
I guess my whole problem with this is that he was arrested after a "routine background check" after he was rousted for camping without specific authorization. That's just a little too East Germany for my taste. Had he been arrested because someone saw his picture on my site and matched him with the arrest warrant, I wouldn't have a problem with it.
One more thing. I don't need an authority figure watching out for me. If none of us ever approached a stranger without a cop looking over our shoulders, we would be in pretty sad shape, not to mention having way too many cops to have any measure of freedom or privacy.
If you look closely at the pictures, you can see that he had a side-handle baton fastened to the right side of the basket on his bicycle. That is a weapon. I saw it at the time, too, and wasn't bothered by it. I was polite, asked his permission to interview him and take photos; and I also stayed out of immediate reach, between my vehicle and him, and didn't leave the keys in my vehicle. I wasn't born yesterday, and I don't need the advice of an authority figure before interfacing with another person.
My apologies to the ranger, but I'm just telling it like I see it.
Comments, anyone?
Posted by Tracy at 12:46 PM

Sorry to have upset your view of this situation by injecting some of the reality. Won't happen again. The ranger.

I'm not upset. Thanks for your input.

This is a difficult issue. There are obviously two sides... and it is very hard to know which is right.

First, it is very true that there can be a series of issues that are not indicative of a willingness to hurt others, but that will give one a healthy criminal background.

Second, someone with a criminal background can certainly be somebody with impaired judgment or morals and be a danger to society. Prisons are overcrowded and at times bad people are let back out too early.

Third, since 9/11 the US has become quite authoritarian. People are extremely uptight about whether or not others are "following the rules". This is a bad trend, in my opinion.

Well, perhaps I listed three sides, and there may be more, so I guess I'm just thinking that nobody needs to be offended if someone is focusing on a different angle.

I do understand that someone in a public position dealing with citizens that are doing stupid things all the time will become jaded...

Excellent, well articulated commentary. Thanks Frugal; you hit the nail on the head.

Well, I see the ranger's point-of-view. The dude was obviously not in stealth mode and was a few crackers short of a jack. I'd have googled him myself. The ranger's comment was apropos and I would not have let it upset me, either. I also interact with odd strangers when I'm hiking, and I do it with a healthy amount of paranoia and companionship because there is sometimes safety to be found in numbers. It's a shame there are so many damaged people in the world. I'd like to know his whole story.

I found your blog on your Van Dweller's post. You have a nicely laid out blog-site.

Thanks, Sandy. I just checked out your blog, and it looks very interesting! I'm gonna have to spend some time reading it.