A Reliable Generator in the Eye Of The Storm 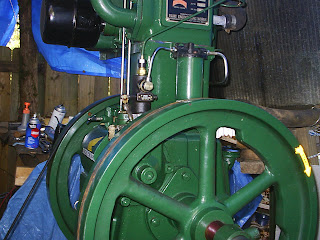 Here are a couple of excerpted reports of Indian-made Lister pattern generator sets being used in Belize during and after the Hurricane Dean landfall. There is also mention of the Chinese single-cylinder diesel engines, which I also like. These excerpts were taken from a Lister engine discussion group that I am a member of. Here's the first excerpt:

When I got up at 6.30am on Monday, CNN was clearly showing Corozal in the danger area. Most of the banks failed to open. Some opened from 8-9am. Time enough to receive the weekend deposits but not time enough to release funds to desperate home owners who wanted to purchase wood, tarpaulins and other building materials. The ATM’s in Belize (when they work) will only pay out $250 at a time.

As I live in a rented house, the burden of financial loss is minimized. It is a hardship to lose appliances and paperwork, but not a tragedy. Clearly the fate of the building was determined at the time of its construction. This rather strange octagonal house is vulnerable due to its proximity to the ocean and metal roof. The walls are constructed of rebar reinforced concrete block. The roof was originally designed to be a palapa (palm leaf cover) but was changed to tin. The windows have no glass. As the eye of the storm was plotted at 10 miles north of us, storm surges would not be a problem. (Hurricanes rotate anti clockwise so, in this situation, the surge is to the north of the eye). My contribution to preparing for high winds was to screw the wooden shutters shut and to cover the generator sets with tarpaulins. The landlord and I removed the tin roof over the engine shed as it would otherwise be torn off. I also filled the back of my pick up with concrete blocks. At 2pm, a thunderstorm started, but was over quickly. By midnight a tropical storm was blowing.

I finally went to bed at 1 am. At 3 am I was awoken by a full gale. This rapidly transformed itself into a category 5 hurricane. In the centre of the living room I had fabricated a rudimentary shelter made of a sofa and 2 easy chairs. These were placed upside down and holes drilled in the feet. A rope went through these holes and held the three together. I was unsure if the roof would stay on and this contraption provided an inner sanctuary against flying debris. By 3.15 am I was safely tucked up in this cave made of furniture. The wind kept increasing and water was pouring through any gap anywhere in the building. By 6am, as the eye touched landfall, the roof was "breathing" with the gusts. It would rattle and vibrate and then visibly lift upwards. When the gust was over it would settle back into its normal position. By now there was 2" of water across the floors. This was a bad time. The hurricane was not visible. Any attempt to open a peephole resulted in a flood of incoming water; outside was pitch black with horizontal rain and wind speeds in excess of 100mph. Dawn provided enough light through the cracks to see how the interior of the house was stressed to the max. There are no ceilings so the roof beams and tin roof were easily observable. It seemed that one more gust and the roof would start to peel away. So in true British fashion I struggled out of my cramped (and wet) shelter and put the kettle on the gas stove. Nothing like a cup of tea in a crisis. By 7am the eye had passed and the immediate danger was over. Outside was chaos. The radio station transmission mast was lying on the ground in a pretzel shape. Power and water had disappeared some time in the early morning. Transmission lines were down everywhere and trees were uprooted or snapped in two. On the positive side, my pick up was undamaged and started easily. My neighbors (and landlord) were safe. His boat and van were undamaged. The bar had lost the palapa (palm leaf roof) but was otherwise O.K.

In retrospect I need to have my head examined! Fortunately my experience at sea had permitted me to guess the wind direction accurately and everything had gone to plan. In as much as you can have a plan in 160mph winds. To be in darkness, alone, wet and feeling foolish, as the eye of a class 5 hurricane ripped overhead was exhilarating but not exactly fun.

Amazingly both generators were working 30 minutes after the rain stopped. The Listeroid started easily but puked out water for the first three compression strokes and then settled down. The 195 started normally, mainly because its exhaust pipe was in the lee of the storm. As the purpose of staying was to conduct exactly that test, I suppose you can call it a success. The Belize equivalent of FEMA (Federal Emergency Management Agency) came to visit just as the 195 was warmed up. They said that they wanted it for the hospital, but we’ll see. As the radio station has no way of transmitting, I will keep the Listeroid for my own use. It is estimated that power will be out for a month.

These generators are tougher than me. Of course they have the distinct advantage of not being prone to bleeding!

The 195 mentioned is the Chinese 12 hp single cylinder diesel. "Listeroid", of course, is the common name for an Indian-built Lister pattern engine. Most of them are exact copies, with full parts interchangeability with the original.
Here is the next excerpt, a journal of hours of operation and fuel usage of a 6/1 (650 rpm) Listeroid being run at 50% of rated speed, or 375 rpm. These fuel usage numbers are amazing!

The mitch that did not miss was an interesting experiment. I awoke to a
completely renovated situation.

My place got hit real hard -- lost most of my many big food trees -- and it
is steady grueling work everyday cleaning up the mess.

Plus still building gensets -- selling equipments -- though mostly to
Mexicans in Chetumal.

I have some new clients -- all restaurants -- and have been assured if I
ever do find time to go to Chet I never have to worry about going hungry.

Small side line the kids have going - charging people's cells phones for a
dollar a pop.

Total operation non stop except once for 30 minutes -

Peter Singfield
Posted by Tracy at 10:48 AM

Email ThisBlogThis!Share to TwitterShare to FacebookShare to Pinterest
Labels: off-grid