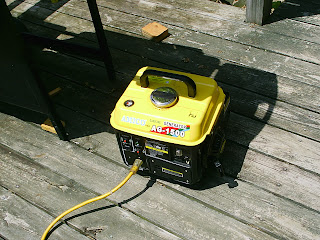 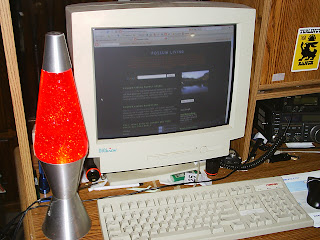 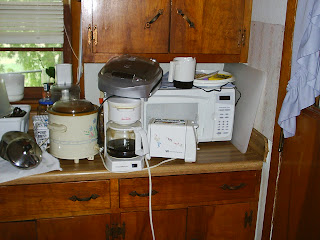 For a couple of years, I've been curious about those low-priced, imported 2-cycle generators. They seem to be just the thing for camping and other occasional, light-duty use. The main recurring question, for me, has been: Will they run an air conditioner? Of course, there's no way they could run a very big one; in fact, only the very smallest, 5000 btu air conditioner has any chance whatever of running on one of these units.
Actually, the problem is not will the genny run an air conditioner, but rather will it start it. After all, most new 5000 btu air conditioners are rated at only about 600 watts input; well within the capability of a generator rated 1000 watts continuous. The problem is the starting surge. Any electric motor draws far more current momentarily when starting, than it does in continuous running; from 3 to 5 times as much, in fact.
To that end, I ordered one of these little generators, for my own use while camping and to review it for this article. Now, I have bigger generators, including three that are diesel-powered, but most of what I have isn't very portable. What I needed was something small and light that would charge batteries and run a few other incidentals including, hopefully, a small air conditioner in my wall tent while camping in the Outer Banks during crab season, for example, or in my travel trailer at Terlingua Ranch.
The generator arrived in just a few days, well packaged and complete with a well-written, English-only owner's manual. I was impressed with the support network of the distributor, Amico International. They have a physical address in California, a toll-free phone number, fax number, and webpage (www.amicousa.com). On their webpage they not only show their products, but also repair parts should those products require service. The generator I bought has a one-year warranty.
The generator has the look and feel of quality; and it starts easily and runs smoothly. So, did it run the air conditioner?
No.
I tried it with two different 5000 btu window units, and it wouldn't start either one. It also wouldn't start a 20 cubic foot, older refrigerator I tried it with.
So what WILL it run? Well, surprisingly, it will start my 2 1/2 hp, 7 1/4" circular saw, and cut 2" thick lumber without a hitch. It runs my 9.6 amp Sawzall, cutting steel pipe. Or anything else I need to cut with it. It runs my portable electric heater, on low (high consumes 1500 watts; well beyond rated capacity). It runs my 9.3 amp microwave oven, my small hot-pot, my toaster, 900 watt 12-cup coffeemaker, 800 watt George Foreman grill, several crock-pots at the same time, a hot-plate; actually any combination of non-inductive loads up to 1000 watts continuously and 1200 watts for a short time. Non-inductive loads means pretty much everything except electric motors; although light bulbs and resistive heating elements do have some inductance, it's not enough to substantially increase start-up current draw. And as demonstrated with the circular saw, a surprising amount of inductive load can be tolerated.
OK, but what about a computer? Obviously, a laptop is no problem; they are designed to run on little power. But a desktop? Well, as I type this and surf the Internet, I am running my desktop PC, a 20" box fan, and a '70s Lava Lamp on the little genny.

Shortly after I wrote that last, I was powering about 850 watts of continuous, resistive load to conduct a fuel economy test when, after about 5 minutes, output ceased. The engine still runs fine, but no output. The problem is not the circuit breaker; I checked that and no power is making it to the breaker. I could send it back for a warranty return, but instead I'm going to delve into it and figure out the problem. All parts for this unit are available and cheap, so I'm gonna save shipping and fix it myself. In fact, I may rewind it for 1000 watts at a lower voltage; say 24 volts at about 40 amps to power a 24 volt inverter with a large capacitor added to give surge capacity. That would make it equivalent to those $500 and up "inverter technology" portable gennys that WILL start an air conditioner. I look forward to a lot of fun playing with this little genny and will add updates as I learn more, but for now I can't recommend this particular unit. I will leave the link up in my store for a short time in case anyone else wants to experiment with one, then remove it.
Posted by Tracy at 11:45 AM

Question to the author:
Do you recall whether or not the box fan ran at full speed when you tested it? When I attach a typical box fan to an only-used-twice AG-1500, the fan does not quite run at full speed. I'm trying to determine if this is normal or not. I understand that inductive loads require more power at start-up, but one would think that something as small as a box fan should run at full speed with this generator.

You need to adjust the governor. If it were a matter of current draw, it simply wouldn't start the fan. But if the engine is not running at the full 3600 rpm, the output frequency will be low, resulting in lower-than-normal rpm of any motor connected to it.

Thanks Tracy. I had previously been fiddling with the governor screw but was uncertain if I was headed in the right direction. Simply turning the screw didn't seem to put enough tension in the governor spring... had to move the spring over a couple of "holes" to get more tension. Only then did turning the screw make a significant difference.

I think it is odd that the generator would come from the factory out of adjustment (is that typical?), but then again I've never owned a generator before.

Anyway, I'm going to run out and get a Kill-A-Watt EZ meter from my local Home Depot so I can actually measure the output frequency. That should allow me to make more precise adjustments.

It is not exactly typical, but it is also not uncommon for a generator to have a maladjusted governor out of the box.
The Kill-A-Watt meter is a good idea.

Ok I bought one of the amico 1500 gensets and it stopped running in 45 days. I sent mail to the company and the store I purchased from. All I get is the run around from both. I would only recommend the amico products as paperwieghts, the company does not honor the warranty. Good Luck if you buy one!!!!